Friends of the Westbank Library

Many of the Okanagan Regional Library branches have "Friends" groups that help with raising funds for extras! Here is the story of the start of one of these groups. If you are interested in joining a "Friends" group please speak with your local branch staff!


"The Origins of the Friends of Westbank Library by John Raybould"


In January 2001, I was doing some photocopying in the Library on the machine on the right as you went in through the old entrance.  As I was copying my pages Sophie was passing by and I said “Perhaps we need a small table to put the work on.”


Sophie replied “Yes, that’s a good idea.  Why don’t you set up a Friends of the Library as that’s the sort of item they could raise money to buy through book sales.”


So I spoke to Barbara Wolfe, the then Librarian, Judy Hammond’s predecessor. She was all in favour.


Therefore, I drew up a notice that read along the lines of  "If you love books, please come to the Library on February  14 at 7.00pm to discuss setting up a Friends of the Westbank Library.”   (NB: note the date!).


And on February 14 about a dozen people came and we had a good discussion. We sat near where Judy’s old office was.


To break the ice, so people could get to know each other I gave each person a piece of paper with a quotation about books on it.


All agreed it was a good idea. I’ll have to check my notes but out of the group we struck a small committee with Mel Brousseau as my Vice Chairman (other Friends’ groups had “Presidents” but I decided that was too pompous!).


Teresa & Keith Boehmer agreed to handle publicity and thinking about members.  Sheila Paynter and Carol Zanon too were active from the beginning…..I’ll have to look up the other names in my “file box!”


So after that little meeting on February 14, the rest is history (as they say!)." 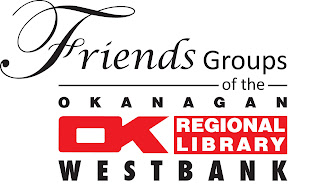 Posted by Okanagan Regional Library at 11:53 AM