Meet Charley Davidson aka The Grim Reaper. She is also a PI who solves cases because she can talk dead people. She is also pretty good at putting clues together and she is one tough cookie. In the first book First Grave on the Right she meets Reyes, who has a huge secret; one that might get Charley killed. This series is edge of your seat suspenseful while being a laugh a minute. It has already won lots of awards and if you like Paranormal Romantic Suspense this is a great series for you. Ms. Jones also writes a Young Adult series (that is a good series for adults too) with the first in the series being called Death and the Girl Next Door. 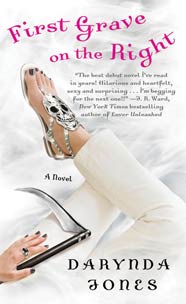 Recommended by Annette from Mission Branch
Posted by Okanagan Regional Library at 3:25 PM